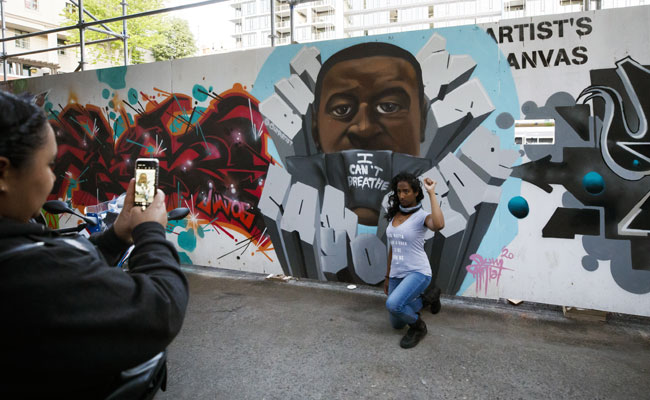 Dozens of street artists have painted over parts of Toronto’s “Graffiti Alley” in shades of black and gray in a message of solidarity with anti-racism protesters following the death in US police custody of George Floyd.

The new sober murals contrast with the brightly colored original paintings in this spot popular with tourists on the south side of Canada’s largest city.

Malcolm X, Martin Luther King Jr, a raised fist — the artwork depicts heroes and symbols of the African-American community, as well as victims of police brutality.

A portrait of the 46-year-old Floyd is among them. The African American died in police custody after a white officer knelt on his neck for nearly nine minutes in Minneapolis on May 25.

His death sparked two weeks of protests in cities across the United States and around the world.

Floyd’s likeness in “Graffiti Alley” bears a black band across his mouth reading “I can’t breathe” — his last words as he pleaded with officers before he lost consciousness.

“But we can hear you,” the artist added around Floyd’s face.

The project is aimed at raising awareness about the anti-racism movement, and for artists to show their support, one of the organizers, Moises Frank, told AFP.

“I think using art as a tool of talking against oppression is a really powerful and beautiful way of protesting,” the 25-year-old said.

“People are starting to realize that (racism) is an issue that we’re not going to shy away from talking about anymore,” he said.

“I hope it’s only the beginning of the conversation.”

One mural depicts a panther with yellow and orange eyes, a tribute to the activism of the Black Panthers.

Another shows a raised fist with the caption, “Still fighting 4 black lives.”

Frank chose to paint Zianna Oliphant, a then-nine-year-old girl who gave a heart-wrenching speech to the Charlotte city council in North Carolina in 2016, in response to the police killing of a 43-year-old black man.

“There’s a video of her circulating (in which) she breaks down in front of the camera about the things that she’s experiencing and sees in her community and the injustice,” Frank said.

“I thought that was a really courageous little girl speaking out against it,” he said.

“I hope that in her lifetime, she can see changes happening.”