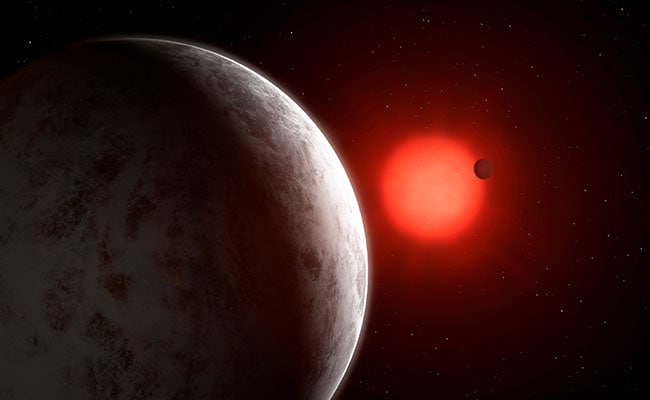 Artist’s impression of the multiplanetary system of super-Earths near red dwarf star Gliese 887.

Up to three planets – potentially rocky like Earth – have been spotted around a star located relatively near our solar system – a planetary system offering astronomers intriguing possibilities in the search for signs of extraterrestrial life.

The planets orbit Gliese 887, a so-called red dwarf star half the sun’s mass located 11 light years from Earth – right in our backyard in cosmic terms, researchers said on Friday. A light year is the distance light travels in a year, 5.9 trillion miles (9.5 trillion km).

Only 12 other stars are closer to our solar system.

Two planets have been definitively identified, one orbiting Gliese 887 every nine days and the other every 21 days. One of these two is situated just inside what is called the habitable zone, or Goldilocks zone, around the star – not too hot and not too cold, perhaps able to maintain liquid water on the surface and harbor life.

A third potential planet orbiting every 50 days is located in the habitable zone, but still needs further confirmation.

“They are ‘super-Earth’ planets, which means that they are a few times the mass of the Earth and are expected to have a solid core like the Earth, as opposed to the big gas giants such as Jupiter and Saturn,” said astronomer Sandra Jeffers of the University of Gottingen in Germany, lead author of the research published this week in the journal Science.

“The newly detected planets are the best possibilities of all the known planets in close proximity to the sun to see if they have atmospheres and to study these atmospheres in detail,” Jeffers added, to learn whether their conditions are “amenable for life.”

This planetary system will be a key target for study using NASA’s next-generation James Webb Space Telescope, due for a 2021 launch, Jeffers said.

Red dwarf stars are relatively small and cool. Gliese 887 is exceptionally inactive in terms of energetic outbursts and dark starspots, meaning it could be hospitable to life on the planets in its orbit.