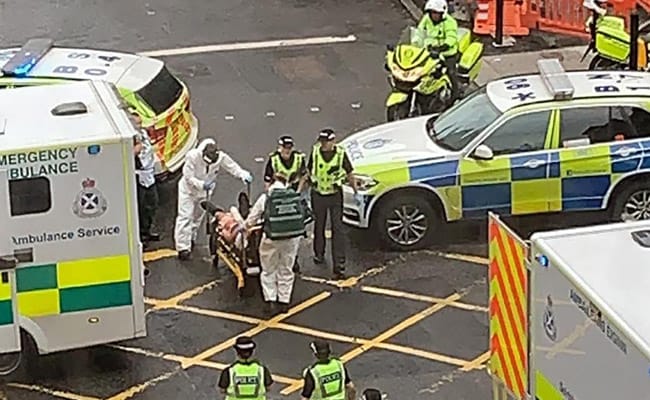 The police said the wounded 42-year-old officer was in a critical but stable condition. (File)

Scottish police on Friday shot dead the suspect in a multiple stabbing at a Glasgow hotel housing asylum seekers that wounded six people, including an officer.

Police Scotland said the incident at the Park Inn hotel in the city’s centre was not being treated as terror-related and urged people to avoid speculation about the motive of the apparent attack.

“Depressingly yet predictably some are using (this) horrific incident to further their far-right agenda,” Scotland’s justice minister Humza Yousaf said in a tweet.

“Glasgow won’t stand for your divisive hatred, so don’t even try it.”

The police said the wounded 42-year-old officer was in a critical but stable condition. The five other victims were all men, aged 17, 18, 20, 38 and 53, the police said. All have been hospitalised.

One man who said he lived on the hotel’s third floor told Sky News television he heard a man shouting for help and a woman screaming.

He went to investigate and found the lift was “covered in blood” then saw two people “gasping for air” after being stabbed.

Britain’s interior ministry has been using empty hotels across the country to house asylum seekers and refugees during the coronavirus pandemic.

The Park Inn hotel was being used to house asylum seekers during the outbreak, homelessness and human rights charity Positive Action in Housing tweeted.

The Kurdish Scottish Association was quoted as saying by the Glasgow Times newspaper there were about 100 asylum seekers in the hotel at the time.

Residents had complained about being kept inside and a lack of money, while some had mental health problems, it said.

Positive Action in Housing has previously voiced concerns about single men, women, families and pregnant women — many of them vulnerable — being “dumped” into hotels.

It came less than a week after three people were stabbed to death in a park in Reading, southeast England, that police were treating as terror-related.

A 25-year-old man widely said to be a Libyan asylum seeker was arrested in connection with the random stabbing that killed three friends.

‘Blood all over the walls’

After the stabbings, television footage showed the police frogmarching people out of the hotel with their hands above their heads.

An unnamed asylum seeker at the hotel told The Times newspaper that he was woken up by screams in the middle of the afternoon.

“I summoned the lift but when the door opened it was covered in blood, all over the walls. I took the stairs and came down,” he was quoted as saying.

“When I got downstairs I saw one of the male receptionists. He was covered in blood. He had been stabbed in the abdomen.”

The man said he saw police assisting another bloodied receptionist by the hotel entrance.

“When I came outside people were shouting and saying the man was still inside the hotel.”

Another witness, who gave her name as Louisa, told Sky News she saw “people being treated with blood on the ground”.

“Police were shouting to people in other buildings near the Park Inn hotel to stay inside and not come into the street.”