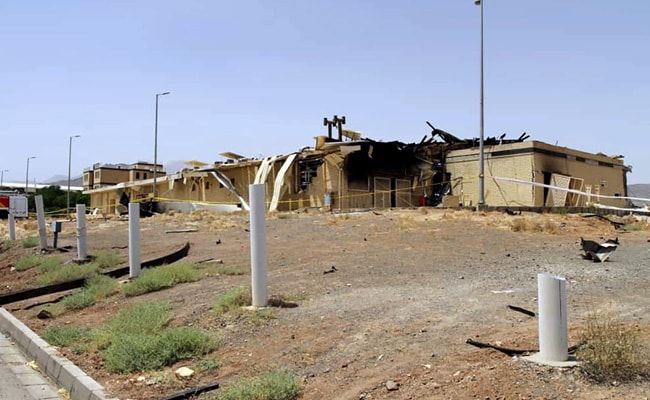 No radioactive material or personnel were present at the warehouse: Official

Tehran on Thursday reported an “accident” at Natanz nuclear complex in central Iran, saying there were no casualties or radioactive pollution, and warned foes — especially Israel — against hostile actions.

There was “no nuclear material (at the damaged warehouse) and no potential of pollution,” the spokesman for Iran’s Atomic Energy Organisation Behrouz Kamalvandi told state television.

Kamalvandi said no radioactive material or personnel were present at the warehouse within the Natanz site in central Iran, one of the country’s main uranium enrichment plants.

He noted that the cause was being investigated, and said it had caused “some structural damage” without specifying the nature of the accident.

There was “no interruption to the work of the enrichment site itself”, which “is working at the pace it used to,” Kamalvandi said.

Hours after the announcement, Iran’s state news agency IRNA published an editorial warning that “if there are signs of hostile countries crossing Iran’s red lines in any way, especially the Zionist regime (Israel) and the United States, Iran’s strategy to confront the new situation must be fundamentally reconsidered.”

The Iranian Atomic Energy Organisation released a photo purportedly from the site, showing a one-storey building with a damaged roof, walls apparently blackened by fire and doors hanging off their hinges as if blown out from the inside.

State TV later showed a different angle of the building with minor damage to its walls and some of its fans still working.

According to a statement released by the nuclear body, the warehouse was under construction and the accident caused no casualties.

Natanz governor Ramezan-Ali Ferdowsi told the Tasnim news agency that a fire had broken out at the warehouse.

IRNA reported that unnamed Israeli social media accounts had claimed the Jewish state was responsible for the “sabotage attempts”.

It stressed that Iran had tried “to prevent escalations and unpredictable situations while defending its position and national interests”.

The BBC’s Persian service, which Iranian authorities consider hostile, said it received a statement “hours before” the accident from a group called the “Homeland Cheetahs” who claimed responsibility for the accident.

They claimed to be “dissidents present in Iran’s security apparatuses” and said the location was targeted as it was not “underground” and therefore the alleged attack could not be denied.

Iran’s nuclear body has yet to provide an explanation for the cause of the accident.

Tehran-based analyst Mohammad Marandi ridiculed claims of responsibility for the accident on Twitter.

“BBC Persian claims sabotage by a secret organisation, while their brethren in Israeli propaganda claim a drone strike! Poor coordination.”

The accident comes six days after an explosion near a military complex rocked the Iranian capital.

The blast in the Parchin area in the southeast of Tehran was due to “leaking gas tanks”, Iran’s defence ministry said on Friday.

Parchin is suspected of having hosted conventional explosion tests with nuclear applications, which the Islamic republic denies.

Tehran announced in May last year it would progressively suspend certain commitments under a 2015 nuclear deal with major powers, unilaterally abandoned by the United States in 2018.

Iran restarted enriching uranium at Natanz last September after having agreed under the accord to put such activities there on hold.

The UN nuclear watchdog said last month that Tehran was continuing to produce enriched uranium in Natanz using “no more than 5,060 (so called first-generation) centrifuges installed in 30 cascades”.

Tehran has always denied its nuclear programme has any military dimension.

The 2015 deal promised Iran sanctions relief in exchange for limiting its atomic activities.

US President Donald Trump’s withdrawal from the deal was followed by Washington reimposing biting unilateral sanctions.