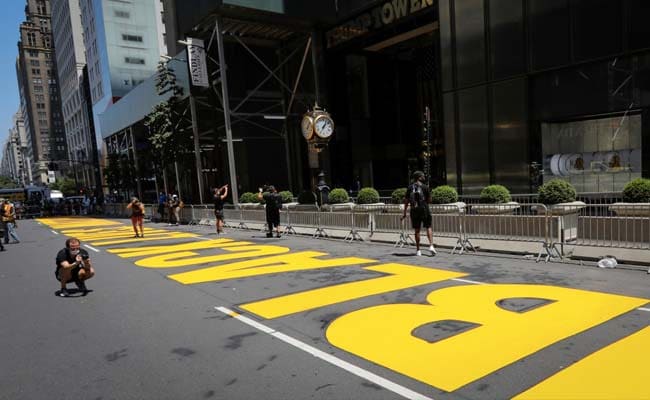 The Black Lives Matter movement gained momentum after George Floyd died in police custody in Minneapolis on May 25 after a white officer knelt on the Black man’s neck.

High school student Betty Kubovy-Weiss, 16, of Manhattan, said her work painting the “V” and “E” of “LIVES” was aimed at counteracting the “negativity and violence” of Trump’s presidency.

“Black Lives Matter is an important statement in and of itself. Our president has generally been highly critical of the movement in a way that I think is very dangerous and damaging to our nation,” Kubovy-Weiss told Reuters.

Trump on Twitter last week called the mural a “symbol of hate.”

Similar Black Lives Matter murals are planned in each of New York City’s five boroughs and have appeared across the United States. They started in Washington, DC, where the massive message covered a street near the White House after authorities used pepper spray to disperse peaceful protesters and clear the way for Trump’s June 1 photo opportunity of him holding a Bible in front of St. John’s Episcopal Church.

“It doesn’t mean that other lives don’t matter – it just means that this shouldn’t be happening,” said James Wallace of New York. “We won’t turn our heads and deny that there is racial violence occurring.”

As a hot sun beat down on hundreds of gallons of paint drying outside one of Manhattan’s most prestigious addresses, de Blasio’s office tweeted a photograph of the mural with the words, “NYC has a message for the world: #BlackLivesMatter.”