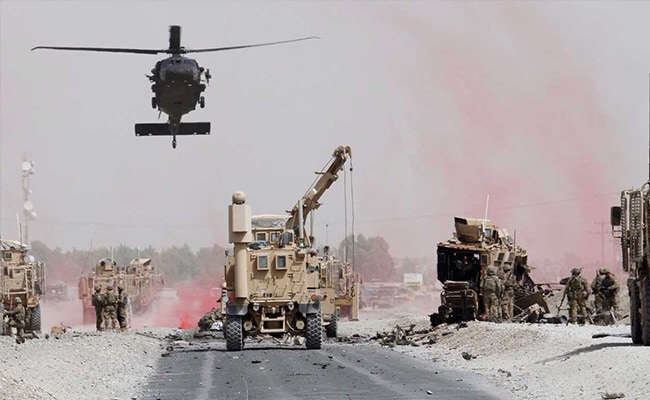 Under phase one, the US said it would reduce troops to 8,600 within 135 days (Representational)

The United States said its landmark deal with the Taliban has entered the “next phase” while urging the militants to reduce rising violence even as the insurgents accused US forces of violating the accord Tuesday.

The two sides signed an agreement in February that saw Washington pledge to withdraw all troops from Afghanistan by the middle of next year, in return for the insurgents promising to hold negotiations with the Afghan government to end the long-running conflict.

Under phase one, the US said it would reduce troops to 8,600 within 135 days, while completely removing forces from five military bases.

On the 135th day, US special representative on Afghanistan, Zalmay Khalilzad, who negotiated the deal for Washington, tweeted that both sides had reached a “key milestone”.

“The US has worked hard to carry out 1st phase of its commitments under the agreement, including to reduce troops & depart five bases,” he said Monday.

As the deal entered its “next phase”, Washington’s approach would be based on certain conditions, Khalilzad warned.

“We will press for completion of prisoner releases, reduction of violence… & start of & progress in intra-Afghan negotiations,” he said.

The Taliban on Tuesday welcomed the cut in US forces, but claimed that American troops had frequently carried out bombings in non-combat zones and “offensives” in support of the Kabul government.

It also accused US pilots of carrying out air strikes against civilians, the Taliban and public infrastructure in the past 10 days.

“These all are blatant violations of the agreement and deliberate attempt at provoking the mujahideen towards large-scale attacks,” the Taliban said.

“Violence has been high”

Since the deal, the Taliban have stepped up attacks killing hundreds, officials say.

Khalilzad condemned the attacks, saying “large numbers” of Afghans continued to die without a reason, while acknowledging that no American had been killed since the deal.

“Violence has been high, especially in recent days and weeks,” Khalilzad said, condemning a Taliban attack on Monday on a rural office of Afghanistan’s intelligence agency that killed 11 security personnel.

“The Taliban’s attack… contradicts their commitment to reduce violence until a permanent ceasefire is reached in intra-Afghan talks.”

Washington’s top diplomat in Kabul, Ross Wilson, also slammed the Taliban for Monday’s attack in the northern city of Aybak.

“This attack in a provincial capital is an escalation that violates the understanding in our agreement with the Taliban to reduce violence and minimize civilian casualties,” he wrote on Twitter.

Afghanistan’s intelligence agency warned of “retaliatory attacks” against the Taliban and said they were not fulfilling their obligations under the US deal.

“The group plans and carries out attacks with the cooperation of foreign terrorist groups, including the Al-Qaeda network,” the National Directorate of Security said on Tuesday.

Under the US-Taliban deal, the insurgents agreed to stop Al-Qaeda from using Afghanistan as a safe haven to plot attacks.

But in the months since, the Taliban have continued to work with Al-Qaeda in the Indian Subcontinent (AQIS), a Pentagon report said earlier this month.

US President Donald Trump, who is running for re-election in November, has said repeatedly that he wants to end America’s longest war as soon as possible.

Peace talks between the Taliban and Kabul hinge on a nearly-completed prisoner exchange agreed in the deal with US.

The government has so far released more than 4,000 Taliban inmates, while the insurgents have freed more than 600 Afghan security personnel.

Afghanistan’s Independent Human Rights Commission, meanwhile, said in a report on Tuesday that in the first six months of this year, 1,213 civilians were killed and another 1,744 wounded in 880 incidents across the country.

It said the figures showed a drop of 11 percent as compared to the first half of 2019.

The Taliban accounted for 48.5 percent of civilian casualties, while 15.5 percent were attributed to government forces.