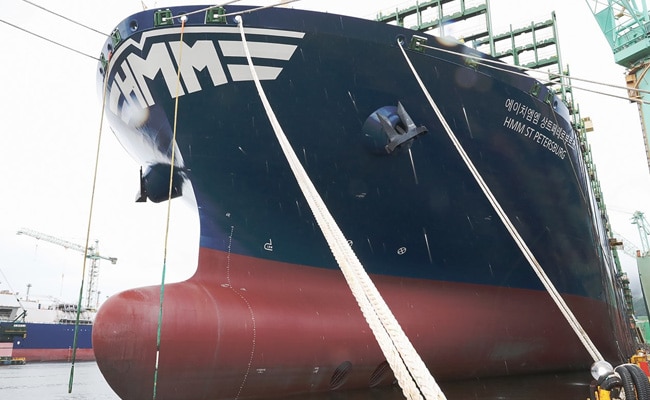 On the bridge of one of the world’s biggest container ships, a worker in a grey protective suit installs the compass that will guide the leviathan across the world.

The finishing touches are being put to the HMM St Petersburg at the Samsung Heavy Industries shipyard on the island of Geoje, at the southern tip of South Korea.

Deep in the bowels of the enormous vessel, welders are dwarfed by the giant engines that will propel it at a maximum speed of over 22 knots.

It has a capacity of 23,820 TEU (twenty-foot equivalent units, the standard measure of a shipping container), which owner Hyundai Merchant Marine (HMM) describes as enough to carry seven billion choco-pies, a popular Korean snack — one for every human being on the planet.

The first of the class to begin operations, the 23,964-TEU HMM Algeciras, made its maiden voyage in April when it set a new world record for shipment volume.

The South’s shipbuilding industry is one of the world’s biggest and was one of the drivers of its decades of economic growth, but in recent years has been hammered by global oversupply and cheaper competition from China.

Similarly the Korean shipping industry was plunged into turmoil by the collapse of Hanjin Shipping, once one of the world’s top 10 container lines, which was declared bankrupt in 2017.

HMM St Petersburg will be delivered in September and make its maiden voyage to Shanghai and other Chinese ports, before heading through the Suez Canal to Rotterdam, Hamburg, Antwerp, and London.

The journey from South Korea to Europe and back is a 12-week round trip, but despite its size and the distance covered, the vessel will have a crew of just 23.